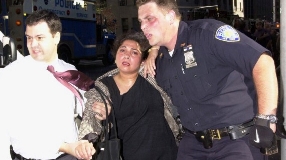 The impact of a traumatic events can vary with their frequency, duration, and intensity. Their intensity can range from high intensity war combat to lesser intensities associated with significant losses, such as one’s spouse, marriage, freedom, health, financial security, occupation, and identity.

Holmes’ Significant Life Events Scale assigns mean values to some 43 stressful events, with scores ranging from 100 (death of spouse) to 11 (minor violations of the law.) Accumulating a high total score from a series of stressful events within a short time, can be as traumatic as experiencing one major stressor over a longer period.

Research has shown that exposure to combat results in considerable risk of mental health problems, including post-traumatic stress disorder (PTSD), major depression, substance abuse, impairment in social functioning, and an inability to work.

The percentage of soldiers with mental health issues prior to the war in Iraq was 9.3 percent, compared with about 16 percent afterwards.

According to a Department of Veterans Affairs report published in Feb 2013, almost once an hour a USA military veteran commits suicide, on average 22 suicides per day.

Just two weeks before the report on veteran suicides, the military released data showing that suicides among those on active duty during 2012 hit a record high of 349 suicides, almost one a day.

That means there are more suicides among active duty soldiers than there are combat deaths, and for every soldier killed by enemy combatants, at least 25 veterans kill themselves.

Statistics about the occurrence of PTSD among the military are likely to be understated, since many soldiers fear the repercussions of admitting they are having difficulty.

Even more striking are the research findings related to the soldiers with active mental health issues. Thirty eight percent answered that they lack trust in mental health professionals, 41 percent said they would be embarrassed to seek help, 50 percent felt seeking help would damage their careers, and 65 percent feared being labeled as weak.

Nearly 30 percent of male civilians with a mental health disorder seek treatment, but fewer than 20 percent of service men seek treatment. This avoidance of trauma therapy is one of the major reasons we created a series of free, practical, self-help videos for self-healing PTSD anonymously.

Besides war combat, PTSD can be induced by other stressful experiences such as natural disasters, domestic violence, sexual assault and childhood abuse.

Studies have shown that about 35% of adult rape victims, 45% of battered women, and 50% of sexually abused children are likely to suffer from PTSD at some point in their lifetime.

Sexual abuse is more common among women than men and is more likely to lead to PTSD than other type of trauma. Consequently, women have twice the reported risk of PTSD as men.

The more severe women’s PTSD, the more likely they are to experience physical symptoms, such as shortness of breath, headaches, joint pain, and abdominal pain.

Men have 30% greater risk of being involved in a traumatic event than women, since they are more prone to witnessing a death/injury and experiencing accidents, nonsexual assault, combat, disaster, fire, serious illness, and injury. Men may under-report psychiatric symptoms and develop other responses, such as alcohol/drug abuse, conduct disorders, and violence.

Most PTSD studies focus on military veterans, but there is increasing interest in emergency, first responders such as police, fire-fighters paramedics, search & rescue workers, news reporters and 911 dispatchers.

Surveys in the United States, Britain, Australia and Brazil show that the rate of PTSD among emergency responders ranges from 5 to 22 per cent, with paramedics reporting the highest levels. Rates of PTSD symptoms in professional fire-fighters may be as high as 18%. A 2009 study, conducted by the U.S. National Institutes of Health, found that as many as one in three police officers in the United States report at least partial PTSD symptoms. Canada’s Department of Public Safety says 36 per cent of the men working as corrections officers within federal penitentiaries report being affected by PTSD.

In North America, we call 911, for an emergency response by police, firefighters, paramedics, and search & rescue teams. By “911 traumas” we, mean the intense fear, horror, and helplessness, that can be experienced by first responders, including 911 dispatchers and on-the-scene news reporters.

Video 5.1-“Healing our 911 Traumas” expands upon our series of emotional tuning videos, designed to help us overcome emotional distress, created by stressful experiences, such as witnessing death, natural disasters, domestic violence, sexual assault, and child abuse. By reprocessing such traumatic memories, we can change how they are remembered and thereby resolve our PTSD problems.

As well as first responders, the video may also be of benefit to soldiers, and anyone else suffering the adverse effects of residual stress, with symptoms such as insomnia, nightmares, intrusive/suicidal thoughts, irritability, hyper-vigilance, anxiety, depression and addictions.

If you have not already practiced the healing protocols in Videos zero to five, we strongly recommend you complete these prerequisite programs sequentially, before proceeding with this video.

Once you have become proficient at practicing the protocols in Video 5.1,
please proceed to 5.2)Shaking PTSD with laughter